Coming from the evergreen Nutmeg tree native to the ‘spice islands’ - Moluccas, nutmeg is the seed kernel found inside the fruit. Now grown in the West Indies, it was once under the sole monopoly of Arabian spice exporters. They exported this in-demand spice to Europe until 1512, when Vasco de Gama laid claim to the Moluccan islands for the Portuguese.

The British were so impressed by the exceptional flavour of this spice that they took over the spice islands by late 18th century. From then on nutmeg gained raging popularity in Europe, with plantations expanding to the East Indian islands and the Carribean.

Nutmeg powder suppliers and spice enthusiasts have long obsessed over its near-magical properties. Since the medieval ages, people used to carry nutmegs as amulets for protection from evil and many health-conditions, a superstitious practice attributed to the spice’s unique health benefits and nutty aroma. As of today, there are proofs of nutmeg’s various health-giving attributes, and it is used widely in food items like desserts, curries, popular westernised beverages like chai tea and mulled wine. Nutmeg is also consumed in the whole seed form, proving a great supplement in light meals and fruit diets.

Although nutmeg is best known for its unique nutty flavour and versatile use in delicacies, it is not technically a nut and does not endanger people with nut-allergies. Its use as a healthy spice is increasing day by day. Some of the best known health benefits of nutmeg include:

Nutmeg has shown strong anti-bacterial effects against harmful bacteria such as the E. coli and Streptococcus mutans. It inhibits the growth of these life-endangering strains in our body, also providing protection against common bacteria-caused infections.

Though high-doses of nutmeg are not advisable, moderate doses have shown great heart-health benefits. It reduces levels of high-triglycerides and cholesterol, both of which are major factors in heart-attacks and coronary blockages.

Controlled studies indicate mood-enhancement effects of nutmeg extract. It is known to induce a sense of slight euphoria in subjects, resulting in better moods more frequently. 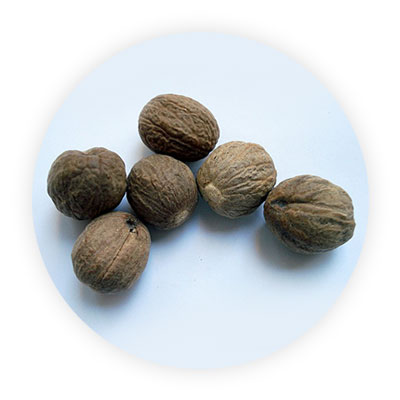